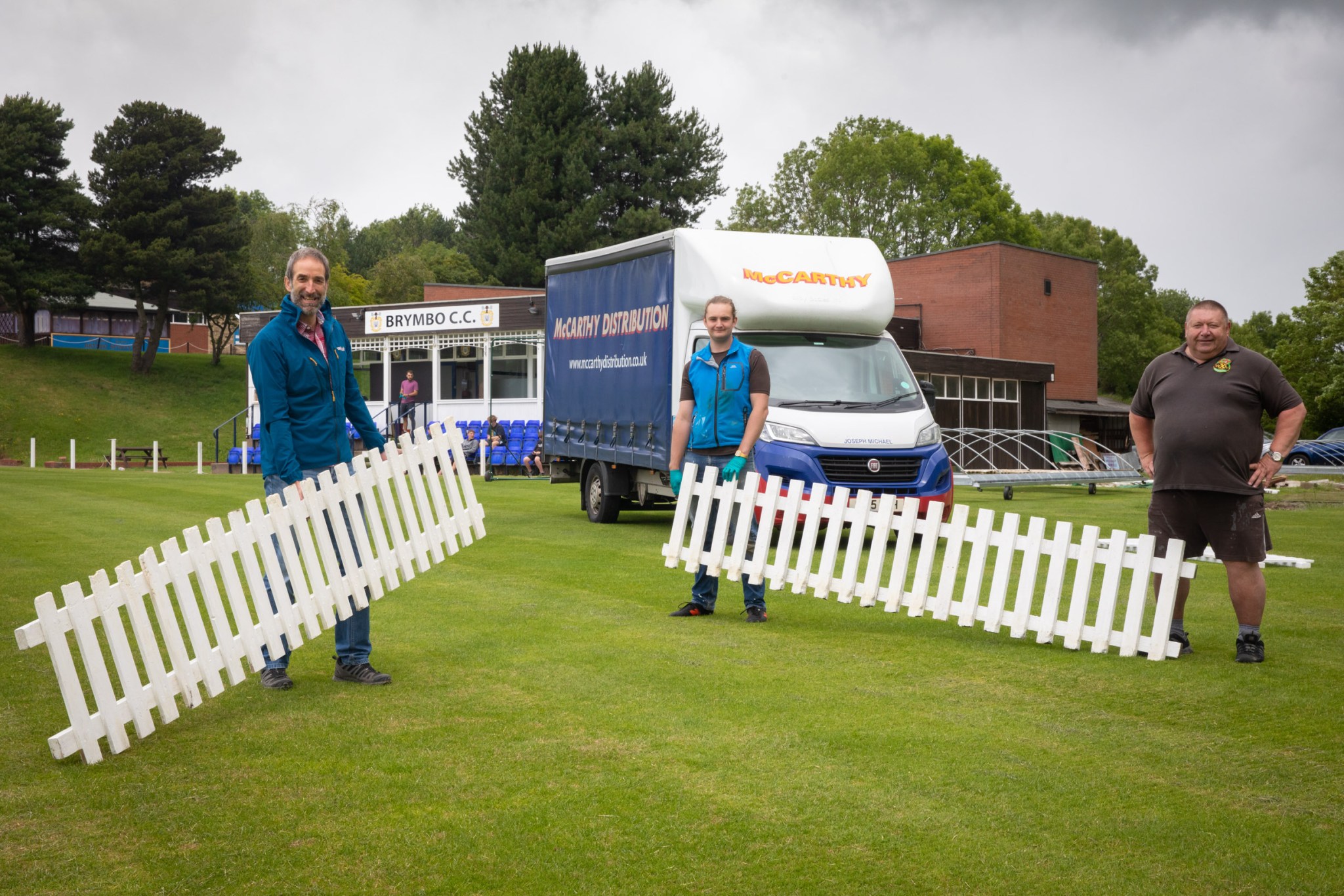 Posted at 18:29h in Business, Community by admin

Brymbo Cricket Club, which is part of the Brymbo Sports and Social Club complex and has been at the heart of the community for more than 100 years, is self-funded and relies on grants, donations and sponsorship to cover the cost of essential maintenance work and new equipment. It’s also nurtured the talents of some of North Wales’ finest players.

We’re very proud and delighted to be able to donate more than 50 pallets so that a team of 30 volunteers can rebuild the club’s damaged perimeter fence.

Since October, the pavilion has been broken into three times and the club is now facing a hefty redecoration bill on top of the need for a new training net. The donation of pallets ensures there is one less maintenance job to fund.

“Brymbo’s chairman Nigel Roberts and his wife Jane are friends of ours and the club has experienced some damage up there recently.

“We always have an excess of pallets. Sometimes they go to the saw mills or are sent to scrap but if we can find people who can make good use out of them then that all helps. We were more than happy to deliver the pallets and help the club out.

“As a business, we do like to help the local community. We try to do what we can.

“Nigel has been a very successful sportsman and cricketer over the years and puts a huge amount of time and effort into the cricket club. We were delighted to provide our support in this small way.”

The club has enjoyed meteoric success over the years, winning league titles, Welsh Cups and just about every cricketing honour in North Wales.

New club chairman Nigel Roberts, a former Wales international, Minor Counties player and Brymbo Cricket Club legend, said it was a vital asset and essential to community life. “As the new chairman I’m obviously looking for ways to improve the club,” said Nigel, who has been involved with Brymbo cricket for over 50 years and whose late father, Dilwyn, and brother Ross were also outstanding players.

“We have a picket fence running around the perimeter of the cricket ground which is weather-beaten and is in a pretty poor state.

“We were thinking about how we’d be able to repair it when my wife Jane contacted Louise, who is an old college friend, and asked if they had any pallets lying around that they didn’t want.

“It was a Godsend when Mike said he could help out and he was true to his word.

“Brymbo’s a very close-knit community. The cricket club is a big asset to the locality and is part of the wider sports complex.

“We’re always looking for sponsorship and whatever material services or cash donations we can to help. Any and every type of business or company is welcome to get involved.”

Work has already begun transforming the wooden slats into new posts and the 300-metre fence should be fully repaired well before the start of next season.

Nigel added: “We have between 20 and 30 volunteers who get up as often as they can during the pre-season. This year it’s a particularly long pre-season with Covid-19.

“Our maintenance manager is Johnny Lister and he has done a great job of organising all these volunteers.”

The Brymbo Sports and Social Complex was originally owned and operated by Brymbo Steel Works and formed in 1882.

It moved to its present ground in Heritage Way, Tanyfron, in 1979 and currently has three senior teams and three junior teams aged from five to 15, with more than 100 members.

“The club is well over 100 years old and is a stalwart of the Brymbo and Wrexham community and has been a very successful cricket club over the years,” said Nigel, a prolific and powerful left-handed batsman in his prime and a clever off-spin bowler.

“We’ve won everything going including leagues, Welsh Cups and competitions – you name it, we’ve won it.

“David Lloyd, Glamorgan’s captain, came through our system as a youngster and played for us. There are quite a few youngsters coming through now. We’re a family club and over the years there have been Lloyds, Smiths and Roberts and dads, sons, brothers and so on. It’s a family atmosphere.

“We’ve got a good team of volunteer coaches who really put the kids through their paces. We’re doing everything we can to promote opportunities for youngsters in the community.”

During the pre-season, the club put together a sponsorship package to encourage local companies to support their activities. In return for their support, firms will be able to advertise their services around the ground.

“It’s only through fundraising and the advertising boards around the club that we can generate an income,” said Nigel.

“We need a new outdoor net facility and are waiting on the outcome of a grant for that. We’re hopeful we’ll hear soon. It costs £35,000 just for the net.

“We have quite a bit of work to do with the pavilion. We’ve had three break-ins since October, the most recent of which was three weeks ago. The insurance will cover the fabric of the building itself but the cleaning up and decorating and getting rid of the mess will be all down to us.”

McCarthy Distribution recently provided pallets and old truck tyres to Homestead Nursery in Gresford to construct treehouses, adventure trails and other structures for the children to play on. “We try to help out if we can. Not everyone wants pallets, of course, but it has been useful for the nursery and we will be supplying more to them in the future,” said Mike.

“As a business, we care about our environmental impact and are genuinely delighted to see our surplus materials used in such a productive way for the benefit of the community.”