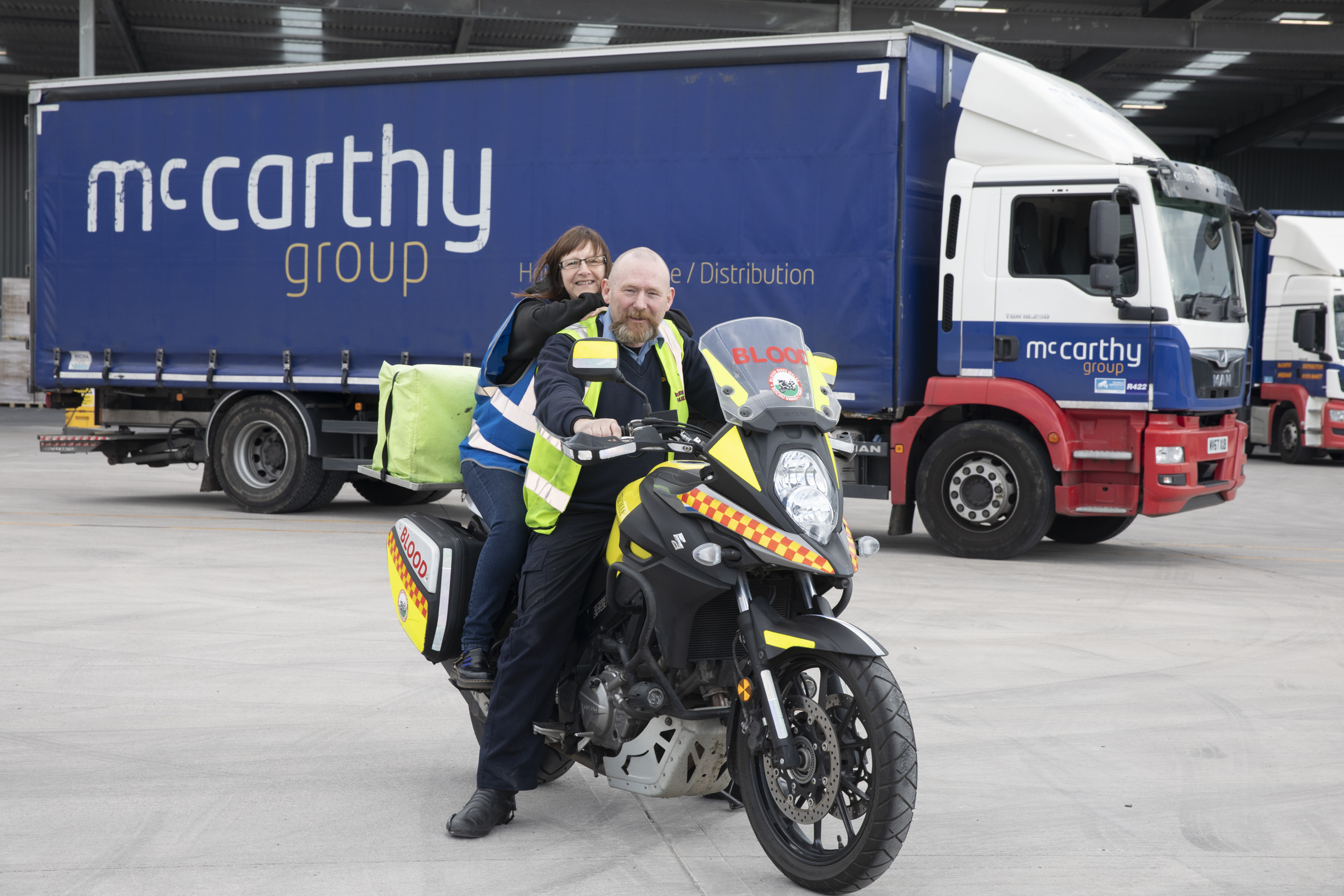 Truck driver Phil who wanted to repay the NHS for helping save his partner’s life after she was twice diagnosed with breast cancer has put his motoring skills to good use by becoming a ‘blood biker’.

Phil Sharrock, 53, a valued member of the McCarthy Driving Team, is also a volunteer rider for the charity Blood Bikes Wales, which transports life-saving blood supplies, plasma, breast milk and documents between hospitals free of charge.

His partner Ruth Gallop, 56, who is also a keen motorcyclist and looks after merchandising for the charity, has twice battled breast cancer and unfortunately doctors have warned her that it is likely to return again in the future. 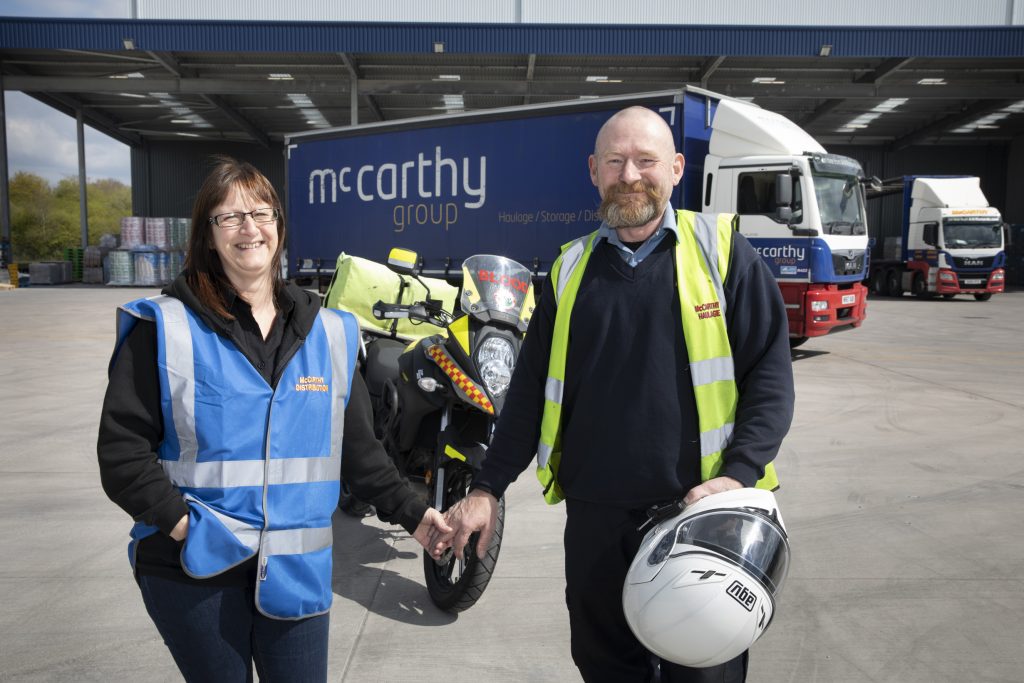 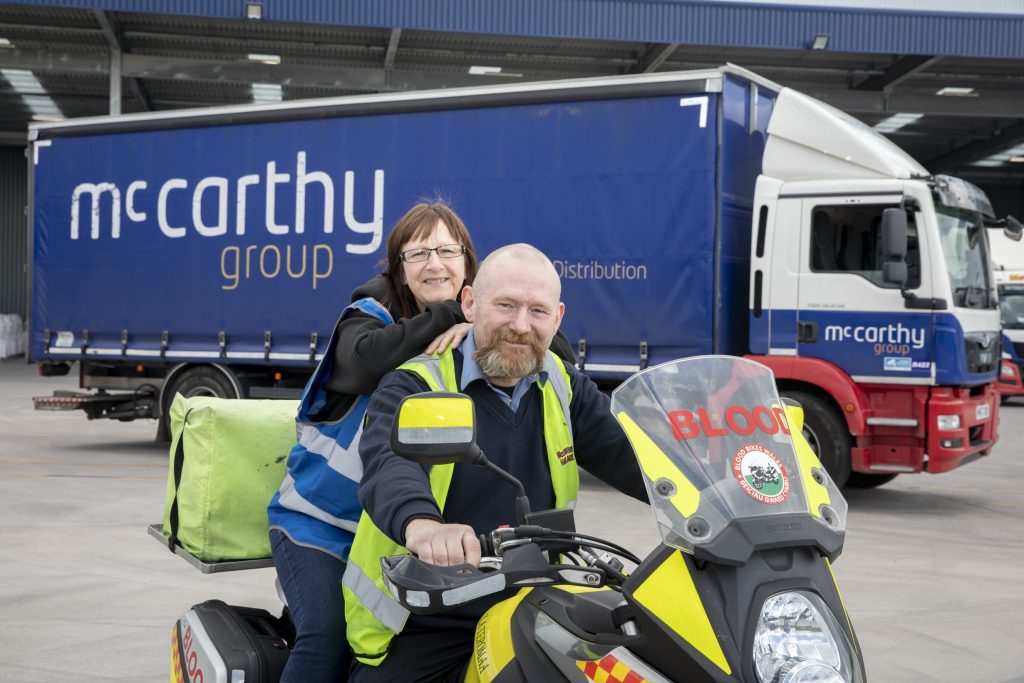 The couple, who live in Rhosddu, Wrexham, met at a motorcycle meet in Whitchurch four years ago and have been both life and motorcycling partners ever since.

Phil, who is originally from Winsford and has four children from a previous relationship, said: “It’s what we like doing at the weekends. We enjoy riding down to mid or South Wales and think nothing about going to Abergavenny for a cup of tea.

“When we go out on our bikes we don’t do anything less than 175 miles. It’s our shared hobby and how we met.

“Just before I’d met Ruth she’d battled breast cancer for a second time so because of what she’s gone through I really wanted to give something back to the NHS.

“I’d seen the blood bikes riding around and thought I’d like to do that so we both expressed an interest and got invited to a meeting. It just went from there.”

Mike McCarthy, Managing Director at McCarthy Distribution, said: “Our drivers are very good at their job and take their responsibilities on the road very seriously so it doesn’t surprise me to hear that Phil has become a valued member of the blood bike team. “Phil and Ruth’s dedication to this cause is admirable and I know those vital supplies will be in very safe hands if Phil is in charge of the bike.”

Phil, also added: “It’s a voluntary service so it helps save the NHS a lot of money. I’m on call for a weekend every one or two months.

“We do an out of hours collection service for hospitals and GP surgeries. We basically transport blood samples or breast milk around the area from Wrexham down to Glan Clwyd.

“But we could go anywhere. I’ve been over to Speke to drop off a sample and you could head down as far as mid Wales, or if a sample needed transporting to South Wales we’d set up a relay with another blood biker.

“About a year ago I was called out to Rhyl to collect a blood sample. It was 9pm at night, -3 outside and I had to take it to Speke to the blood transfusion labs.

“It’s something I’m happy to do though because it’s a really great charity.”
Ruth, who has three children from a previous relationship and moved to Wrexham from Devon in 2000, was 31 when she was diagnosed with breast cancer for the first time.

The Flintshire County Council compliance training officer said:  “I had a lump for a while but it didn’t grow so I didn’t go to the doctors until a friend told me to. They did a biopsy and it blew out of control. It escalated because they think the biopsy aggravated it.

“I had the operation to remove the left breast and I underwent hormone-based chemotherapy every four to six weeks for up to eight months.

“I was a single parent with two children at the time so my main concern was them. I was more worried about them and what they would do without me.

“I went into remission and was OK for 20 years, pretty much to the day, when I then found another lump in my chest on the same side.

“It turned out to be a different type of cancer this time. It was quite aggressive and the doctor told me it would keep coming back. I’ve been ok now for five years but if I notice that anything has changed I need to go straight back.

“After the second time I made up a bucket list. I’ve done surfing, white water rafting and completed my motorcycle test. I also did a skydive to raise £1,500 for Nightingale Hospice and was the only person at the time to do it while still battling cancer.”

Having twice battled breast cancer, Ruth was keen to urge other women to make sure they regularly check themselves over.

She said: “Everyone is different. Some people can talk about it and some don’t feel as comfortable. How I look at it is make sure you always check yourself at least once a month.

“If you feel anything out of the norm go and get checked because the quicker you catch it the better chance you have.”

Phil and Ruth said they were keen for more people to join them in supporting the invaluable work carried out by Blood Bikes Wales.

Ruth said: “Everyone has a different reason for doing it but you have to be dedicated and prepared to give up your time especially in the summer when we attend a lot of shows.”