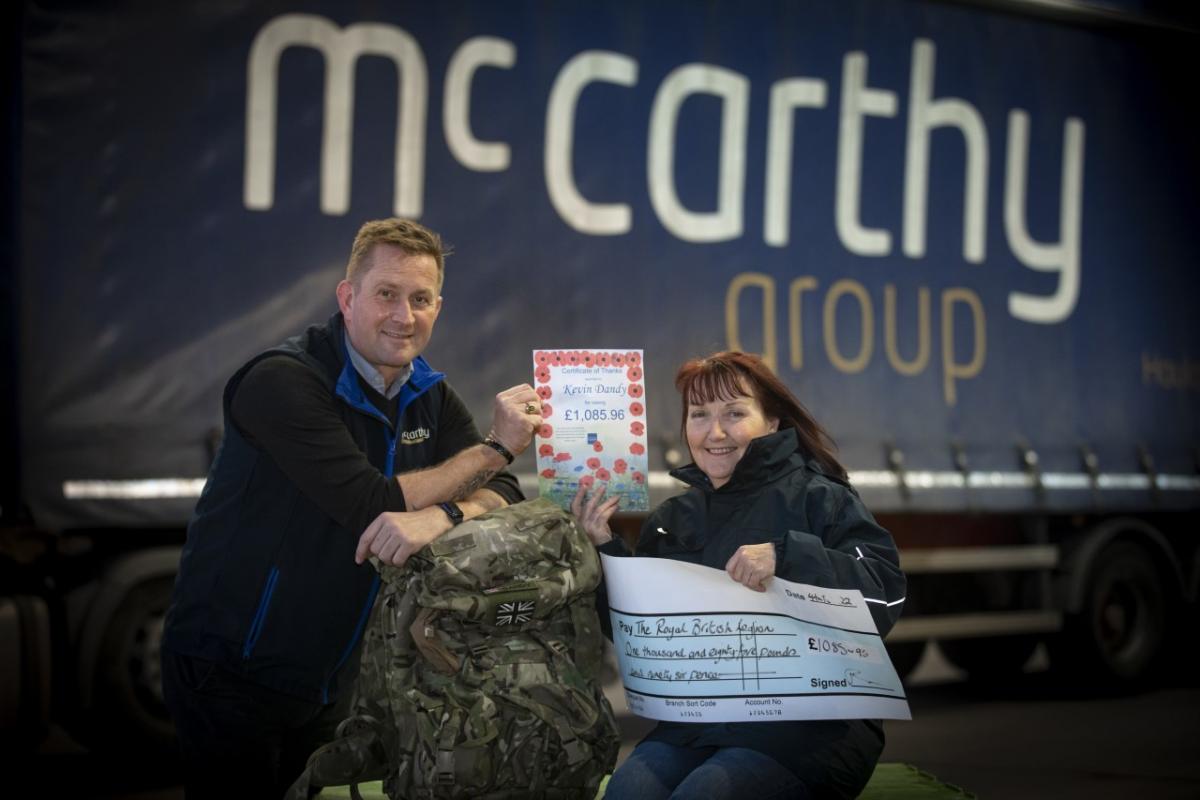 Posted at 22:11h in Community by admin

The mother of a young soldier killed while serving in Afghanistan has spoken after ex-forces veterans paid tribute to him during a stamina-sapping fund-raising run.

Truck driving instructor Kevin Dandy, who works for McCarthy Distribution in Wrexham, raised more than £1,000 for the Royal British Legion and a further £250 for the Curtis Palmer Programme run by the charity Pilgrim Bandits.

A former reserves fitness instructor with the Royal Signals, Kevin completed a series of 5K runs, each one with a rucksack strapped to his back containing 25 kilos.

Prior to the runs, Kevin had received a number of good luck wishes, including a message of support from Cheshire mum Lisa Snow who Kevin noticed once lived in his own home village of Waverton near Chester.

Kevin reached out to Lisa and asked about her story. He was devastated to discover Lisa’s young son Joe Berry, 21, was killed while on an army tour of Afghanistan in 2020.

After learning more about Joe and wishing to pay a more personal tribute to him Kevin set off around Chester, with an A4 photo of Joe on his rucksack, and was even joined by other ex-forces members.

He said: “Joe lost his life serving our country and at such a young age. As an ex-Forces member myself I wanted to recognise that sacrifice at the same time as raising money for services charities.

“It was so inspiring. In the end there were five of us, blokes I’d never met before but all with photos of Joe on our rucksacks. At the end of the circuit, we all went to Chester Cathedral to pay our respects at the Remembrance Day memorial there where we met Lisa. It was such an emotionally moving experience.”

Lisa said: “I was so touched that Kevin reached out in the way he did. I want to keep Joe’s name alive and what Kevin and the others did was such a lovely, special tribute. It made the world of difference to me to think that complete strangers would come out and walk in Joe’s name like that. I’ll never forget what they did.”

Kevin raised a total of £1,085 for the Royal British Legion (RBL) after doing an uphill run of Moel Famau, near Mold, a circuit of Delamere Forest, Chester and park runs in Wrexham and Ellesmere Port.

He invited Ruth Jones, the RBL community fundraiser for West Cheshire, to the McCarthy Distribution headquarters on Wrexham Industrial Estate where he handed over the bumper cheque.

Ruth said: “What he did is amazing and every penny of the sum he raised will go to help our causes supporting servicemen and their families in need.

“We are so grateful to Kevin and everyone who sponsored him including all his colleagues and managers here at McCarthy Distribution.”