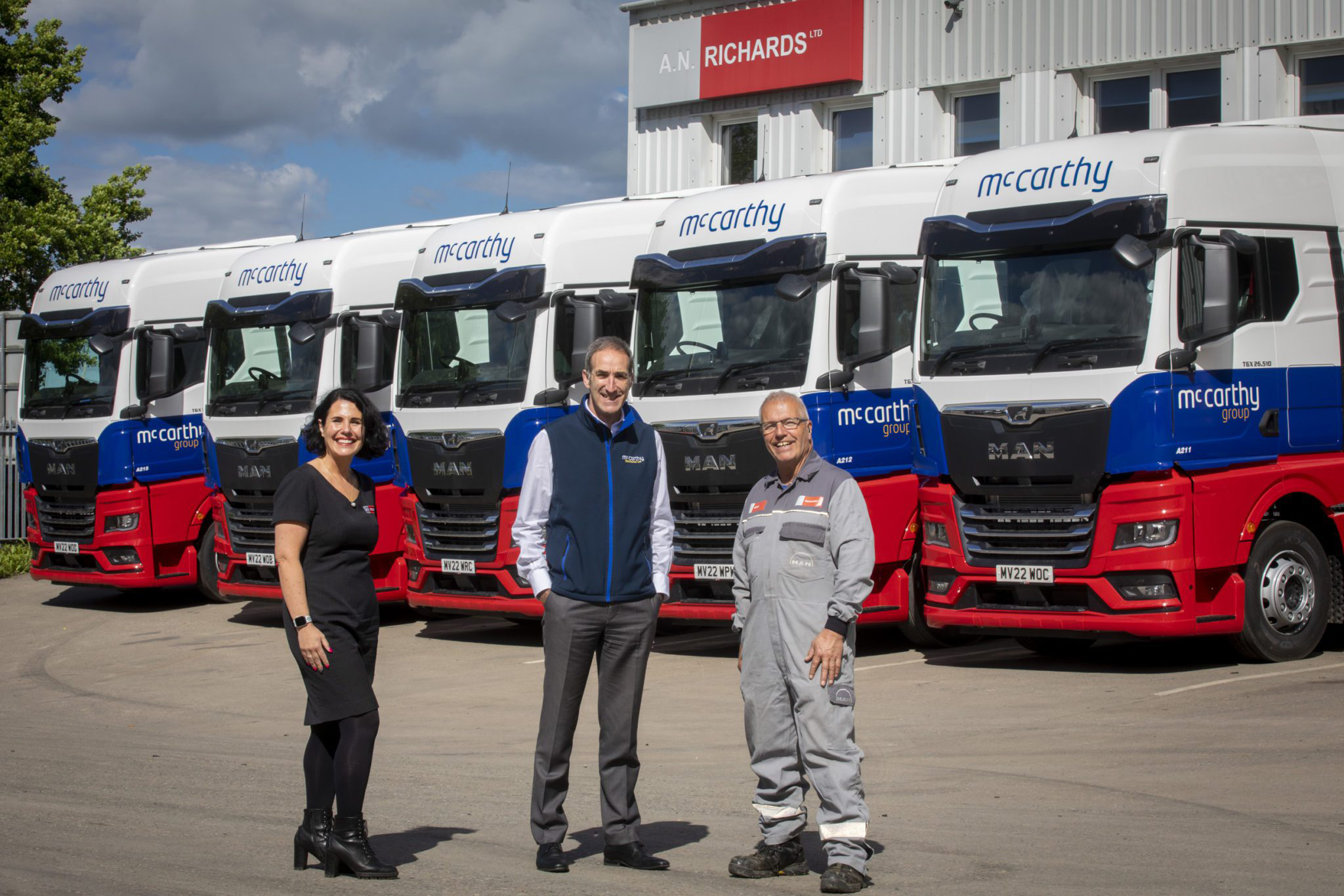 Posted at 23:37h in Business, Staff by admin

It’s home from home comforts for our drivers as we take delivery of the 100th truck from A N Richards.

The new TG3 MAN tractor units fitted with all the mod cons including a fridge, microwave and a television include the 100th truck they have bought from AN Richards, from Froncysyllte, near Llangollen, in nearly two decades of collaboration.

The two family-run companies have been doing business together since 2005, helping each other on the road to success.

With an ambitious target to increase turnover to £15 million, creating 30 new jobs in the process – the strategy to take the firm to the “next level” includes increasing warehouse capacity and taking on contract packing work.

The high spec Elm Point warehouse complex that opened in 2019 recently gained approval from Organic Farmers and Growers (OF&G) to add to their accreditation from the British Retail Consortium (BRC).

Mike McCarthy said: “We go back a long way with AN Richards and the service and support we had from them over the years has been second to none.

“Essentially, we are two family businesses who work well together. They really look after us.

“It’s a fantastic product and they are fantastic people which provides the foundation for our excellent relationship.

“This latest batch includes the 100th truck and these new vehicles represent a substantial investment because they are £120,000 each.

“In terms of the technology, these vehicles are very advanced and the emissions are the lowest you can get.

“The specifications on the trucks have now come on in leaps and bounds in terms of driver comfort which is incredibly important because they can be away all week.

“You can stand up in them, they’ve got fridges, microwaves and television – so they’re more like a mobile home. They have everything to make the driver self-sufficient.”

He added: “They also have a host of safety features, including four cameras – front and rear and one on each side.

“We can dial in to those cameras should the driver need assistance, so we can access them from a portal at our offices in Wrexham.

“But it’s aimed at the direct vision standard as well, so it’s for safety for cyclists on the near side, so you can see them.

“There are also sensors if someone comes on the inside that will warn the driver that there’s a cyclist there.”

The Richards family have been in the motor trade since the early 1900s they have been operating on their current site for more 40 years.

The managing director is Bryn Richards whose wife, Rose, is the office manager.

Their daughter, Johanna Cooke, is company secretary while Bryn’s brother Gary is now semi-retired and taking more of a back seat.

The MAN dealership employs 47 mostly local people and prides itself in using local suppliers whenever possible.

“Our whole ethos is keeping people’s trucks on the road, looking after everybody as much as we can.

“It’s a real family run business because also my husband works here, my sister-in-law too, so we are like one big family really.”

As well as selling trucks, they also hire them out while they also do MoTs and accident repairs and have a bespoke engineering department.

Bryn Richards said: “We like to describe the company as one that provides total transport solutions.

“We’re very proud to play our part in helping a fantastic company such as McCarthy Distribution and to be part of that chain that keeps them trucking.

“It’s a brilliant partnership and they rely on us as a company to keep their wheels and their business moving.”