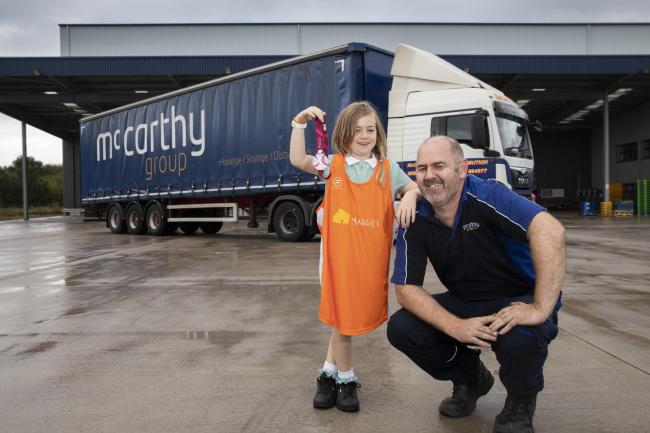 Posted at 22:13h in Business, Community by Diane Howell

Our BIG-HEARTED truck driver Brian Edwards, 46 and his eight-year-old daughter are planning a sponsored run to raise money for a multiple sclerosis charity.

Brian, one of our shunters was diagnosed with the condition 20 years ago. Luckily, he has only very occasionally suffered very minor symptoms – cold feet in winter and tingling hands – since it was confirmed.

He and little Lily, a pupil of Penygelli Community Primary School, in Coedpoeth, are planning a repeat of another fund-raiser they completed over the summer.
Brian ran a total of 50 miles in a month, mainly around the Moss Valley, near Wrexham, and Lily joined him for around 20 of those miles.

He raised £180 for cancer charity Maggie’s which provides support for people who  have the disease and their families.
According to  Brian, he was grateful to all his work colleagues who chipped in to boost the proceeds.

Brian joined the McCarthy Group 12 months ago when his previous employers, Tomlinson’s Dairies, where he had worked for 27 years, went bust. As well as trying to lose a bit of weight, he was also inspired by his father, Alan, to raise money for Maggie’s which has 30 centres across the UK, the nearest being in Liverpool.

Brian said: “Every family has a connection with cancer and my dad had prostate cancer two years ago so I thought I would like to give something back.

“It was a bit of a scare initially when I heard he had cancer because you automatically think the worst but thankfully they caught it early enough and treated it so he’s now okay.

“I hadn’t done any running before and I wasn’t particularly athletic at school but I thought it would be good for me and a good way of losing a bit of weight. In the event I lost nearly a stone.

“Raising money for such a good cause and giving something back gave me extra motivation.

“I usually work four days on and four days off and when I’m working I finish at 5pm, so I would run a mile after work.

“When I was off, I would run three or four miles a day and in total I ran 50 miles, mainly in the Moss Valley.

“Quite a bit  of the time Lily came with me and she probably ran up to 20 miles in total. She’s full of energy and she’s a very caring person.

“My colleagues at McCarthy sponsored me and I raised around £180. They’ve all be very supportive.”

Brian has had to put his plans for the next charity fundraiser on hold because he’s cracked a rib.

But once he’s up and running again, he’s planning to do a sponsored run in aid of the MS Society  and Lily is going to be joining in again.

He said: “I was diagnosed with it about 20 years ago. I woke up one morning and my left eye had turned in the socket and was facing sideways while my right eye was looking straight ahead.

“Slowly over a period of about a week, it righted itself and came back to normal.

“I went to see the doctor who sent me for an MRI scan which confirmed it was MS.

“I have had no real symptoms since then, except for cold feet in the winter and I get tingly hands now and then

“It was a big worry when it was first diagnosed. But it is what it is. I don’t dwell on it and I just get on with things. I can’t do anything about it.

“She’s full of energy and a very caring girl who makes me very proud.”

Our managing director Mike McCarthy said: “we have a great team at the McCarthy Group and Brian has fitted in brilliantly since he joined us last year. “He and little Lily did a great job in raising money for Maggie’s and it’s all systems go for another sponsored effort. I take my hat off to them both.”